How Do Our Water Systems Work?

Water is a renewable resource that is provided naturally through the earth’s water cycle, in the form of precipitation. While water is provided by nature, many of us rely on a complex network of pipes, pumps, equipment, and people provided by our community’s municipal water systems to safely deliver clean water to our taps, and remove used water from our homes and businesses.

There are 6 key stages in our municipal water systems: 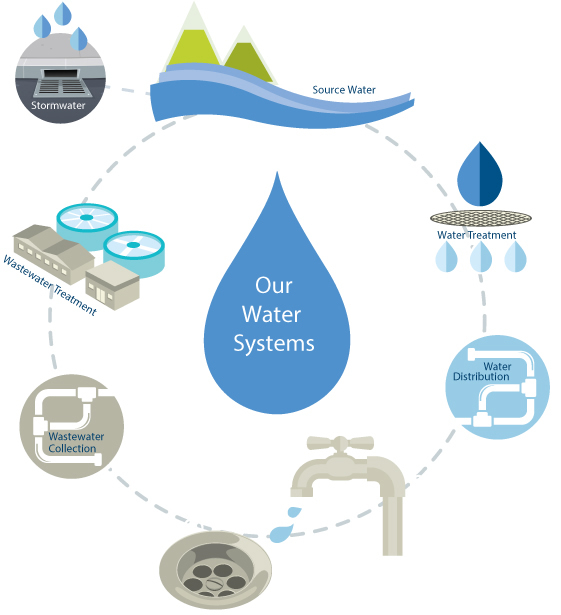 Where does our water come from?

How does water get from the source to our taps?

In municipal water systems, water is withdrawn from the water source and treated before it is pumped to our homes and businesses. The quality of the source water determines the type of treatment method. Most systems will include several stages of filtration (to remove suspended particles, debris and algae) and disinfection (to remove bacteria and viruses and purify the water). Disinfection methods include chlorination and treatment with UV (ultra violet) light.

After treatment, municipal water systems distribute water to homes and businesses in large pipes called water mains that are usually buried under our roads and sidewalks. Water mains are maintained by our local governments, and paid for by water rates and property taxes.

Water lines are smaller pipes that transport the water from water mains to individual homes, apartments and businesses. Water lines are the responsibility of the property owner.

How do we know our water is safe to drink?

Water in municipal systems is required to meet strict water quality standards established in provincial regulations, and is tested regularly to ensure that it is safe to drink.

Where does our water go?

In British Columbia, 86% of residents depend on municipal sewer systems to take used water away from their homes and businesses, 13% of residents collect their used water in private septic systems, and 1% of residents get their used water hauled away. Used water from sewer pipes is pumped to wastewater treatment facilities, where it is treated before it is released into the environment. The treatment method that is used is affected by the types of contaminants in the sewage, the receiving environment for the treated wastewater, and the effluent requirements established in local, provincial and federal regulations. 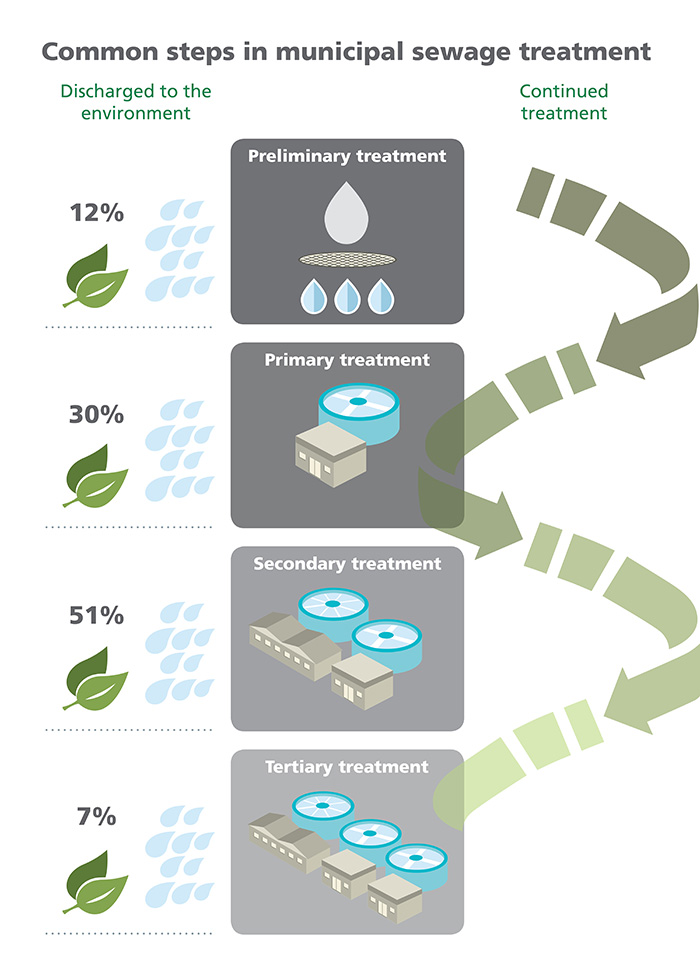 We can all protect our sewer systems. TAKE ACTION NOW!

Stormwater is the result of rain or melting snow. Some of this water is absorbed by the earth and percolates down into underground aquifers, and some finds its way through ditches to streams and rivers that flow into lakes and oceans.

In urban areas, where the ground is covered by sealed surfaces such as roads, parking lots, or buildings, stormwater systems prevent flooding of our homes and businesses by collecting the water in storm drains and piping it to lakes, rivers and the ocean.

Stormwater is not treated before it is discharged to the environment. This means that contaminants and debris can wash into the system, and impact humans, fish and other wildlife that use the lakes, rivers and ocean areas where stormwater flows.